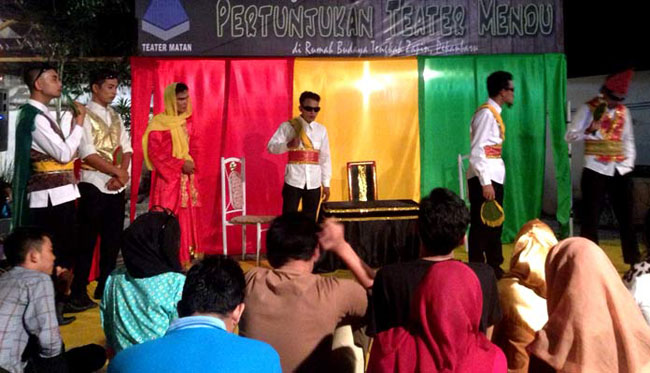 Natuna Regency of Riau Archipelago Province consists of numerous natural attractions like small islands and beaches. Is that all? Well, like other regions in Indonesia, it has some signature performances and arts as well. For example, there is Mendu. To be exact, it comes from Pulau Laut Sub-District and has been practiced by the locals over time as the pride of Natuna. In terms of name, Mendu means “to entertain those who feel homesick and lovesick. Aside from becoming local’s entertainment, the performance has become a good attraction to tourists or everyone who visits Natuna Regency. So, what is it about?

About Mendu
Mendu has been part of Natuna’s culture for decades. The performers may practice this art in an open field and it can be done by both men and women. When it comes to history, it is said Mendu was inspired by Parsi Shadow Puppet and has been developing since the 1780s. According to the locals, this show was done only by men back then. Thanks to modernization. Today you can see local women performing it as well. The unique part is that the performers do not even use any scripts in order to entertain the audience. Instead, they combine dances and songs in order to deliver the message or story.

Enjoying Mendu Performance
The best location to enjoy Mendu is in Pulau Laut Sub-District, where the art is originated. One thing, you need to learn the schedule of the performance before going there. Have no worries. The local tour agent would help you regarding such matter. Once you get the opportunity to enjoy the performance, it is time to go to the site. In a nutshell, the show has two main features which are dances and songs. Both of them combine into a beautiful performance and may mesmerize all audience! Also, it is usually done at night after the locals have done with their routines.

Many songs are often used in Mandu, including Jalan Kunon, Catuk, Wayat, Lemak Lamun, etc. When it comes to the dances, these include Beremas, Air Mawar, Lakau, etc. Mandu has become a medium to eradicate both lovesick and homesick among traders and travelers back then. They performed it at night before sleeping and used it as the source of spirit for the next day. Today, Mandu is regularly performed by the locals and the audience is mostly local fishermen and tourists.

Here is the fact. Mandu also tells stories to the audience. For instance, it is related to Mendu God’s legend and the show is performed for about 14 nights! There is an opening dance called Ladun at the beginning of the show. Later, the main show begins and it is the best time for tourists to take pictures using the camera. Make sure not to disturb the performers, though.

Where to Stay
Recommended hotels are available in Bunguran Island