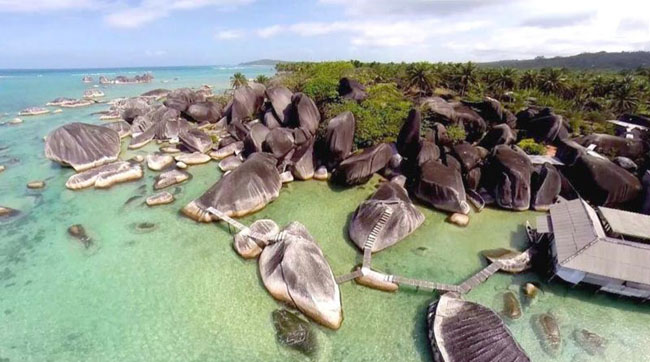 Alif Stone Park, a famous tourist spot which situated in East Bunguran Sub-District, belongs to Natuna Regency in Riau Islands, Indonesia. To be exact, the park resides in Sepempang Village and it is easy to reach from the capital of Natuna Regency – Ranai City. As a matter of fact, this place becomes a kind of recommended destination for all-age people to get their vacation. Hearing about the word “park” you may imagine a lot of flowers and plants, yet the main feature that form this Alif Stone Park is stone. Moreover, what makes this park unique and interesting is its location which is near to the beach.

The Nuance
The big stones which resides on the shoreline as the main feature of Alif Stone Park are kind of granites which have been there since pre-historic era. For the development of this area, the government has built stairs, bridges, bungalows, and other facilities that are important for tourist accommodation. As a result, tourists are able to explore the site comfortably. The lines of coconut trees grow well and create a refreshing nuance to enjoy the site. The breezy wind along with the soothing sound of the wave will make you feel in peace.

Exploring Alif Stone Park
Once you pass through the main entrance, a formation of granites welcomes you plainly. Small bridges are seen as well on the site, so you can explore the location safely. During the adventure, it is allowed to take pictures and rest for a while. It is even possible to enter the gap between the stones and play water there. Some small fish are also seen clearly due to the good visibility of the sea water. Make sure to watch your steps when exploring those granites, though. The surface becomes slippery sometimes, especially during rainy season.

Before continuing the adventure, it is better to learn why the site is called Alif Stone Park. According to the locals, one of the stones represents the shape of an Arabic letter “Alif”. Due to such phenomenon, the locals decided to name it that way. Not to mention such special stone becomes the prime attraction of the site, it also often becomes an object of photography among tourists. Thus, do not miss the chance to get closer to it and take selfies!

Aside from exploring the granites, tourists should consider renting a boat and get to the beach with their families. The sea water is shallow and the waves are small, so it would be safe to ride a boat there. Later, you can rest in nearby bungalows and enjoy some foods or drinks before continuing the adventure.

How to Get There
As mentioned before, the park is located in East Bunguran Sub-District. That means it takes about 15 minutes from Ranai City to the park. Make sure to use Sihotang Street for a faster route, though. Once you arrive at the park, you can directly enter the site without paying an entrance fee.